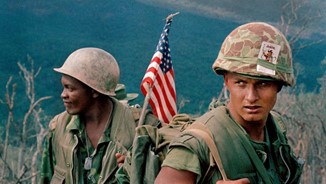 Event Description:
The Brown County Museum of History opens a new exhibit on November 11, 2021 to honor all veterans and especially highlight those who served in the Vietnam War. We are very proud to present this display and let veterans know that we appreciate their service,said Dion White, Museum board president.
The exhibit, titled Vietnam Veterans:  Our Forgotten Heroes, showcases a time in our nations history when people were sharply divided. Against a backdrop of the 1950s and 1960s, the exhibit depicts facets of the Vietnam War and the men and women who served, who often returned home to criticism and hostility because of the unpopularity of the war.
The exhibit shows artifacts and the story of Brown County resident Capt. Paul Wade, who served two tours as a helicopter pilot in Vietnam.  But all those who served have a place of honor in the exhibit, said Wade. Most returning vets did not receive gratitude at that time, and the Brown County Museum of History wants veterans to feel the respect they are due.  Wade will be receiving a Purple Heart at 11:00 on the 11th at the Central Texas Veterans Memorial in Brownwood.  The medal was earned during his service in Vietnam.
The Museum invites everyone to bring photos of themselves or loved ones as Vietnam veterans to post in the exhibit. Free admission will be offered to all veterans.
Date/Time Information:
Vietnam Veterans: Our Forgotten Heroes will be on exhibit November 11 December 31, 2021. Museum hours:  Thursdays & Fridays 10-2, Saturdays 10-4. For more information or to schedule a group tour please call the Museum 325-641-1926. Museum hours will be extended to 4:00 p.m. on Veterans Day, November 11th.