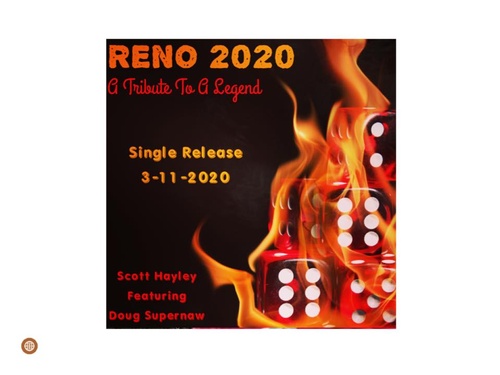 To provide a little back story, Scott Hayley and Doug Supernaw became friends in 2017 and as of recent, worked together to collaborate a remake of his 1993 hit song, Reno. Scott’s version reflects the rock nature of his style while also paying tribute to the “beauty of the time” when Doug perfected it back in 1993.

As many of you well know, Doug was dealt a devastating cancer diagnosis in early 2019. Doug was not expected to make it to 2020. As of now, Doug is feeling well, active, and cantankerous as can be! As of now, Doug is planning on making this occasion. We want to encourage everyone to come celebrate, not only the song, but also Doug’s courageous fight!

Festivities will begin at 7:00 pm on the Dawn Marie “Texas like this” radio show on 101.3 KOXE Brownwood, where the song will officially be released. Immediately following, from 9:00 pm - 12:00 am, we’ll have a Reno release party at Waylon and Ray’s place featuring performances by Ariel Hutchins, Colton Fox, Darrin Morris, and Scott Hayley.

Join us for a great time and we are so looking forward to seeing you all!
Location:
Waylon's and Ray's Place
411 S Broadway St, Brownwood, Texas 76801